Henson Disposal & Recycling is C&D, construction and demolition, facility located in Bloomington, IL that serves local customers within a 25 mile radius. Originally started in 1998, the founder Tom Kirk owned a roll off truck with two dumpsters. He had no employees and wasn’t looking to grow, however competitive pressures forced his business to evolved over time into a successful and multi-location recycling & disposal facility.

Electric eventually became the solution for Henson Disposal & Recycling as it cut out significant operational costs and has allowed Tom’s business to grow. They now have facilities in Urbana and Bloomington, IL.

Initially, Kirk was not planning to purchase yellow iron, but after seeing the simplicity and serviceability of the HG4000E first hand, he knew Vermeer was the solution for his growing business.

‘I felt there was little risk with this Vermeer electric unit. I knew Vermeer Midwest would back up their product,’ said Kirk. 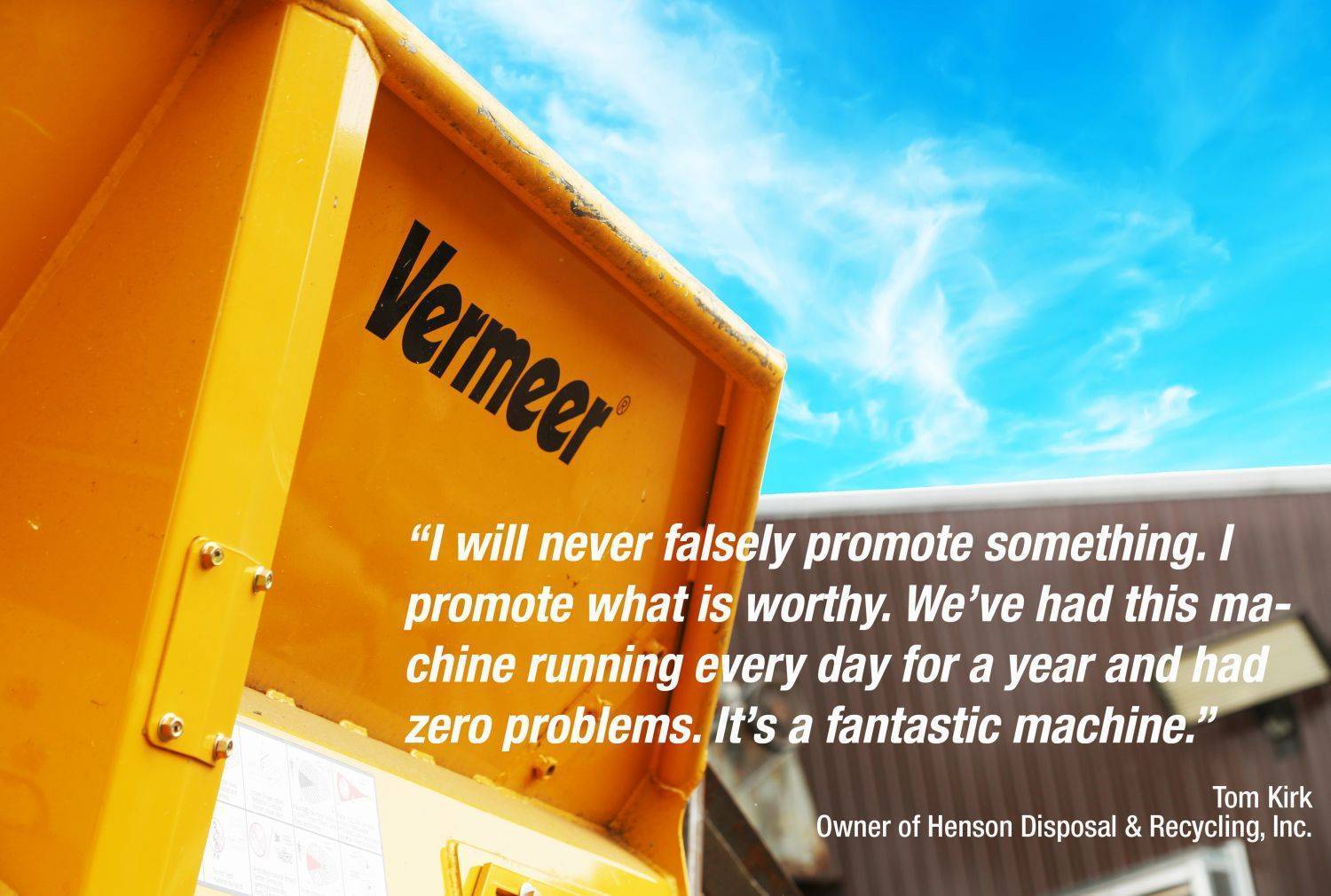 Kirk began processing with a non-Vermeer diesel horizontal grinder – a grinder he says was the worst purchasing decision of his career due to struggles with maintenance, overall performance and fuel costs. He eventually purchased a used electric Rotochopper which he 100% rebuilt, but only having only one electric unit was described as the weak link of his operation.
Bringing electric solutions to the table has proved to significantly cut operational costs. Kirk stressed when you take out the diesel engine, you take out the headaches and majority of all machine problems.
Kirk commented, ‘If you compare fuel consumption to electrical costs, it’s night and day difference. The savings in fuel are unbelievable and will pay for the machine in no time. The cost savings are off the chart.’
What sold Henson Recycling & Disposal on the Vermeer HG4000E? Its overall simplicity, serviceability, cutter drum technology, design, and Vermeer Midwest’s commitment to making him successful with the unit.
‘I liked the simplicity of Vermeer, it’s easy to work on, easy to get in to and well-designed throughout. The cutter drum is great – there’s nothing quite like it. It’s simple,’ said Kirk.

Vermeer Corporate sent engineers to Henson Disposal & Recycling six months prior to machine delivery. During the routine checklist, they discovered Kirk didn’t have enough power to support the HG4000E. It was a crucial discovery to uncover early as it took all of those six months to upgrade the power supply. In addition, a third party initially took measurements of Tom’s facility, equipment, and supporting pieces to provide Vermeer with CAD drawings. The preliminary work ensured all pieces would fit and work together once they arrived at Kirk’s facility.

‘I knew the HG4000E was overkill at the time I bought it, but I also knew it would be the only way our business would grow and handle the capacity we wanted to get to. It would hold our future needs, and now we’re ready for them,’ said Kirk.
In the coming years, Henson Recycling & Disposal is looking increase daily capacity from 240 tons to 400-600 tons. They plan to eventually expand operations to five locations allowing them to get through 1,000 tons a day.
Kirk mentioned, ‘I’ve been very happy with Vermeer Midwest. I haven’t had to do much with them since purchasing the machine, and that’s why I’m happy!’
“I will never falsely promote something. I promote what is worthy. We’ve had this machine running every day for a year and had zero problems. It’s a fantastic machine.”
Tom Kirk
Owner of Henson Disposal & Recycling
Trader Interactive